Memories of Charles, My Father-In-Law 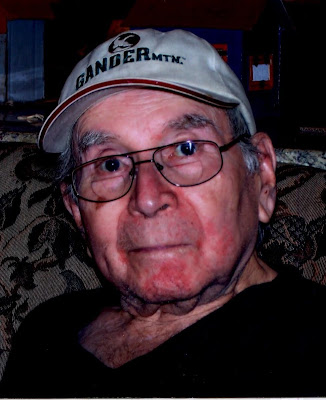 I can’t remember when Charles was not a part of my life. He worked with my dad, later my mother and brother. Then I just so happen to marry his son, Mike.

My earliest memory of Charles is when I had to write a report for fifth grade. I had destroyed two or three folders trying to get the title just right. My dad feared he would have to buy stock in Aladdin so he drove me to Charles’ house for him to write the title on my folder. Charles had beautiful penmanship. Later, he always signed our birthday cards in calligraphy, sometimes copying his favorite poems on the back of our cards.

Charles was great with his hands, working on cars, cooking, and woodworking. On many occasions I was the recipient of his handiwork. He also treated his wife like a queen, and when she was so sick, he waited on her hand and foot. He passed those traits on to his son so I continue to be blessed by his gifts.

Charles loved to shop for Christmas and always made sure I had at least one present under the tree at the family gathering. The year his company moved across the street from the Tuesday Morning warehouse, the tree was overflowing with presents.

Charles loved to laugh. He loved funny cards, funny jokes, and embarrassing stories, repeating them often, even if they were on him. The last time I saw him was in the hospital about a month ago. Even in his pain, the nurse made him giggle by saying he was good looking. As I typed his obituary, I accidently left out one little word, with. My husband, my sister-in-law, and the lady from the paper all proofread it and didn't notice. I know Charles would be tickled pink if he knew at his funeral, we laughed at our error and annouced that we wrote, Charles left this Earth to be -- the Lord.

Charles did not go to church as an adult and Mike and I sent up many prayers for his salvation, not sure if he ever had made a profession of faith. One day, before he moved out of his house, we couldn’t get him on the phone. Worried, Mike and Cameron went to check on him. I decided to tag along. When we arrived, I was happy to sit in the car and read my rag mag. But God had other plans, "You need to go inside and talk to Charles."
Dad was never very receptive to church talk so I argued. I just want to sit in the car and read my magazine. God was emphatic, "NO, go inside." I knew in my heart, that’s why I came. God practically pushed me out of the car so I had no choice but to go in.

The guys were out back so I sat down and started watching a TV program. The TV was always on at Dad’s house. He had three TV's running and three VCR's recording at all times. If we got interested in a show, we might not get to see the end of it because Charles changed the channel checking to see if his other shows were recording or to just watch something else without warning.
Who knew Dad was visionary. Today just about everyone I know records four or more shows at once on our DVRs and have a TV in almost every room of the house.
Mike found Dad out back in the hot sun with his riding lawn mower trying to mow his quarter acre lot. It was by God's grace he hadn't found the key to the mower. Mike came in through the back door with Cam and said, “Come on, we’re going to get ice.”

“Ya'll go. I’m staying.” Mike raised his eyebrows. Without telling him my true intention I said, “I got interested in this show.” It wasn't a lie, I can get interested in any show at the drop of a hat.

Charles walked in a few minutes after they left. Surprised to see me, he asked, “What are you doing here?”

”I came with Mike.” Like on cue, the show ended.

After Charles sat down in his big easy chair, my heart pounding, I turned and said, “Can I ask you a question?”

I bit the bullet, “Do you believe in God?”

Miraculously, he was open to the question. “Yes, I do and I’m ready to go and be with Mom in Heaven.”

Wow. I didn't expect that.

Wanting to be sure he understood, I asked if he believed in Jesus and that he had died on the cross for our sins, that he rose again, and had Charles asked him into his heart?

Again his answer was confident, “Yes, yes, I do. I've made my peace with God.”

Relief flooded through me. Later, he found his baptism card from when he was four to show me that he had been baptized as a child.

A little nervous Mike asked, “You did what?”

I told him about the conversation I had with Charles. Tears welled up as he said, “The bible says if you profess your faith before men. I’ve been praying for someone to talk to Dad about salvation because I couldn’t. Thank you.”

Then next time Mike went over, Charles said, “Billie came to see me.” (Billie is my mother) “She asked if I knew God and I told her I did.”

Then Charles told Mike the whole conversation and he had even been reading his bible. Mike siad, “If you have any questions, Dad, I’ll be happy to answer them.” Praise God, He opened the door.

I was happy to know Dad remembered and understood, even if he did think I was my mom.

A few weeks later, Charles went to the hospital. I wanted to go see him, just to make sure once more. I was fearful dementia would take over or that we would lose him. He kept looking at me and I wondered, is he was thinking about our talk or does he think I'm Billie?

As we all stood in the hospital room, Leigh noticed he’d been cleaned up and asked. “Papaw, who shaved you?”

Without hesitation he answered, “Jesus.”

We laughed wondering if some long haired PCT had been his barber that day. Leigh asked again, “Jesus shaved you?”

“Yes, he did.” Confident in his answer. He could be quite amusing with his confused thinking and we always just went with it.
The nurse ran us out so we went to the waiting room. I told the others about our talk that day. Then it hit me, I said, “I bet he thought you said, “Who saved you?” Everyone agreed that made more sense.

I had my answer. Jesus not only had pushed me that day to talk to Charles for his sake, but for the family to have the calm assurance of knowing that Dad really was a Christian.

I am confident that on Monday, April 12, 2010, as Dad left this world, he was met at Heaven’s gate by his mother, Agnes, his brothers, hopefully all three will be there, and so many of his other relatives and friends, including my dad, Bill Jones. And by his beautiful wife, my late mother-in-law Elsie, that he loved so much, who, no doubt, led the welcoming committee . But none more precious than when Charles Arthur met Jesus Christ face to face. The celebration continues until we meet again.
See you later, Dad.


Posted by Grandmommy at 7:25 AM No comments: