Photo of the Day: Handicap Hand

Note to Self: Do NOT use a metal toilet paper holder as a handicap bar.
It breaks apart and tears skin.
Looks like I hit someone. I didn't, I promise.
So this is my handicapped hand. 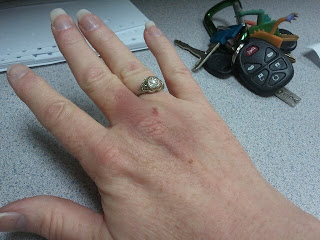 Sunday night just before the kid's play I made a quick trip to the potty.
I didn't go in the handicap stall, the door was shut and I was in a hurry.
I held on to the tp holder but it didn't hold me.
It slipped apart and the metal piece jabbed into my hand.
The cut on the side (not shown) doesn't look quite a bad and bruised punture wound on top.
So I went to the doctor today for my 3 month checkup and I casually show my hand to him.
He was concerned it might be infected so I came out with a tetanus shot
(only had the one with diptheria and pertussis so no hooping cough for me)
and a new antibiotic to take 3 times a day, in case it's infected.
Sounds pretty intense to me. I think he was a little worried.
Then I remembered later, it is on the right hand, attached to the right arm which
I'm not supposed to even get BP taken on since I'm short a few lymph nodes.
Hmmm.
Guess it was a good idea to show him although my arm might argue with that.
So far it isn't sore though.
I learned years ago it hurts less if you relax your arm.
or hurts more if you tense up.
Works both ways.
The doc also told me to diet and exercise. I begged for diet pills but he's a no go on those.
At least my bloodwork was good.
So I'll be back to trying to lose weight with diet and exercise.
Too bad there's not a shot for that.
Posted by Grandmommy at 8:14 PM No comments:

Our Soul Patrol kids at church are performing a play called A Love Ministry tomorrow night, February 12th, and I can't wait. We just got back from dress rehearsal and these children are awesome. We had some no shows but we've been working on it for so long the others kids filled in the parts pretty easily. Praying they all make it to the performance. I have some pretty awesome kids in this group. I'm sure it will work out. God won't let us fail when we are doing it for Him.

I wrote the play so it's a double dose of excitement here. To see the kids perform my work and the pleasure of working with them. They may not believe it the way I yell (in love) but I absolutely love working with them. They are so fun and exuberant (which is why I have to get loud) but I just want to hug them all. I really do love you guys. I mean it.

The weather man is predicting snow flurries. Seriously? We've had beautiful weather, barely even had to wear a coat this winter and just as we finally settle down to do our play, snow? Not happening. Again, God is watching over us. You hear that, devil?

I'm already thinking of what we can do next. This play has puppets, singings, Godzilla, break dancing, solo's and acting all from kids ages 5 to 12. How can we top that? We may have to take it on the road. Nursing homes, here we come.

Posted by Grandmommy at 7:53 PM No comments:

I have been wondering around the Internet tonight. I have joined the Pinterest epidemic and still have yet to totally understand how people I don't know find my pins to repin. I don't mind, am even flattered a bit but where are the directions to this thing. I'm not totally addicted yet but I'm sure I will be soon. So far, I'm just having fun searching for pins to become so popular my inbox is overflowing with repins. My most popular yet is Red Barn with 44 repins. Cracks me up. It is a neat pic of a red barn though.

I've been looking at "organizing" pins and blogs. Funny how so many have the same pins. Like the world wide web isn't as big as we think it is. Still working on organizing our craft room. The tables are up but we still have some tweaking to add. Pictures will be coming soon. Right now I'm working on some sort of a CD holder for my stamps. Maybe a box. It'll be interesting to find out how I finally settle on something functional yet neat.

This weekend the kids at church, The Soul Patrol, will be performing a play I wrote for them and singing some really cute songs. I can't wait. One, for them to perform and two, for it to be over. We have been working so hard and long on it that they have it down pat (I hope). It is so cute and the kids are awesome. They seem to love it. The play is a fictional story about a group of kids doing ministry in a Soul Patrol . Praying all goes well and no one gets sick. Erin missed tonight with strep throat so meds should be kicking in before Sunday.

My own daughter and grandson in Kansas have strep so guess it's going around the country. My son-in-law in Kansas had an accident last night but praise the Lord he wasn't hurt and the truck still runs. Of course, that was after two tow trucks had to pull him off the guard rail. He hit some black ice and no one else was involved. Lacey sent pictures of snow, but I didn't even think about the road having an ice layer. Guess James didn't either.

So that's about it for Wednesday. I need to get to bed. Still not independently wealthy, so 6:30 am and work will be here sooner than I'd like. We always told our kids, find what you love and make a career out of it. I finally found a job that I love, okay really like. Let's just say it's the only one that I have stuck it out eleven years and plan to retire from someday. But what I really love is writing and crafting and I have yet make the money doing that as I make at my desk job. So, writing and crafting will be my fun ministry and hobby and Walmart will provide the money to fund my habit.

Find your talent, use your gifts, and God will bless you as you minister to others. Ministry In Action.
Posted by Grandmommy at 9:52 PM No comments: